How blockchain can improve carbon trading and the broader carbon market 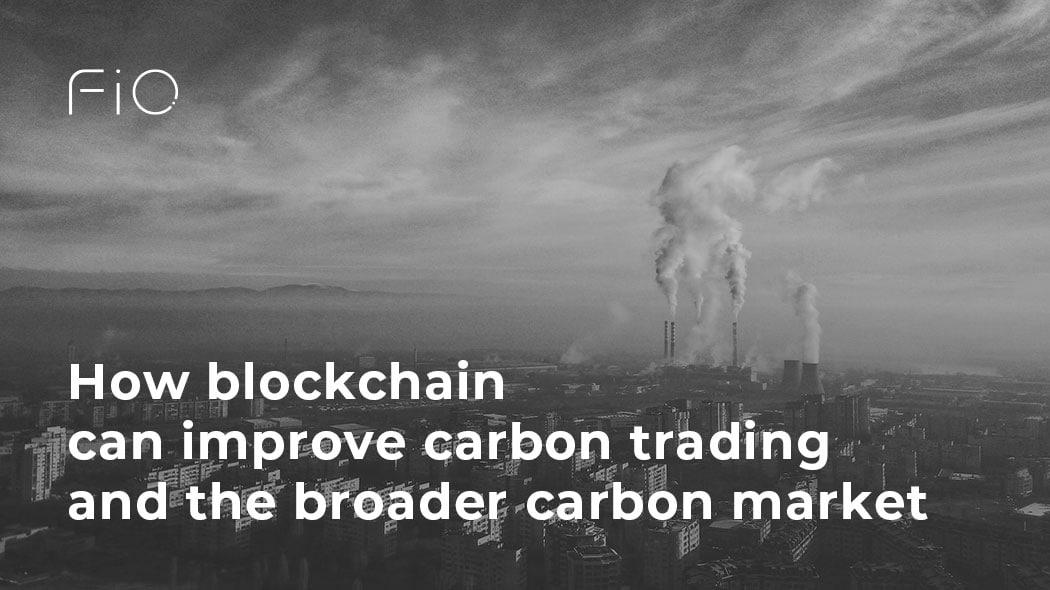 Climate change is real. Natural disasters are happening around the world, and unless mitigation efforts are bolstered and improved, the earth will face dire consequences from climate change in the coming decades. Barring a few countries, every country in the world signed the Paris Agreement in 2015, which outlined global objectives to reduce carbon emissions and establish regulations to support the objectives. Have you considered which emerging disruptive technologies can contribute to global efforts in mitigating the negative impact of climate change? Blockchain is one of the key technologies that can significantly improve the efficacy, efficiency, and transparency of carbon trading and the overall carbon market. In turn, a more trustable and transparent carbon market can encourage governments and businesses to invest in decarbonization efforts.

Introduction to the carbon market, credits, and offsets

From the 2015 Paris agreement (and the 1997 Kyoto Protocol before that) arose the provisional solution to mitigate climate change–what we know today as the global carbon market. Essentially, it converts carbon emissions into a tradeable commodity that can be priced, bought, and sold within the carbon market–or simply put, carbon trading. When converted into a commodity, carbon emissions become carbon credits, or carbon offsets. Although the two terms are used interchangeably and represent a cutback/removal of carbon emissions that are rewarded for emissions created elsewhere, they are fundamentally different in how they work.

On the other hand, carbon offsets represent the removal of carbon emissions. Offsets are created when business activities enable the business to remove a specific unit of carbon emissions from the atmosphere. The carbon revenue is then usually traded horizontally on the voluntary carbon market (VCM) from businesses to other businesses.

The next couple sections will discuss how businesses can generate and sell carbon credits.

How to generate carbon credits and offsets

Generally speaking, carbon credits are created based on governmental standards and regulations. For example, the state of California in the U.S. generates credits for a resident’s electricity and fuel consumption based on carbon emissions targets. Businesses in California are able to deal with carbon credits under a “cap-and-trade” program, which incentivizes businesses to reduce carbon emissions and stay under the cap. Ultimately, this creates the compliance carbon market (more on this later).

On the other hand, businesses can generate carbon offsets from the reduction, capture, and storage of carbon emissions through various activities and projects, such as renewable/alternative energy projects, improvements in energy efficiency, and reforestation. Because businesses are not forced to participate, this creates the voluntary carbon market, which will be explained more in detail later.

Businesses based in countries with ample natural resources, geographically rich landscapes, and other renewable energy sources can draw from these resources to create carbon offsets. Another way to generate carbon offsets is to save energy by converting to more environmentally friendly energy sources and infrastructure (e.g. LED light bulbs) to mitigate power consumption. Lastly, planting new trees and restoring forests are yet another way to generate carbon credits because they help reduce pollution.

Online carbon exchanges are a popular way of selling carbon credits and receive cash compensation for the generated offsets. Think of them as another commodity or stock exchange, but in this case, the asset is carbon. These exchanges have their unique standards and protocols that businesses must adhere to, in order to conduct carbon trading.

Within the scope of the compliance carbon market, carbon credits are verified by the government because the government is the entity issuing credits. However, within the scope of the voluntary carbon market created from market demand, carbon credits do not have a government entity to regulate. Therefore, these credits are verified by the market itself. Essentially, the market automatically becomes a third-party verifier and entities within the market make sure market participants receive fair compensation. Ultimately, this causes a whole set of problems that will be explained in a later section.

Who can purchase carbon credits?

Another benefit of selling carbon credits is the 21st century adherence to corporate social responsibility (CSR) in the business world. Not only is it important to generate revenue, but it is now equally crucial to be environmentally conscious and aware of how much carbon emissions a business produces. A business can say they are “green,” but if they don’t back it up with concrete actions to reduce their carbon footprint, environmentally conscious consumers may not support the business.

In 2020, the voluntary carbon market was valued at around $400m. According to a report from Ecosystem Marketplace (EM), the real market valuation of the voluntary carbon market has already reached roughly $2 billion, almost quadrupling its value from the previous year. If countries continue to meet the targets set by the Paris Agreement, the market value is forecasted to grow to $10-25 billion by the year 2030.

Problems with the current carbon market

Currently, the carbon credit market is still nascent; therefore, it has its share of problems. Among them, the three problems we want to emphasize are: “greenwashing,” implementation issues, and a lack of stakeholder inclusion and inequality.

Greenwashing is a phenomenon that occurs when businesses give a false pretense of environmental consciousness, possibly falsify their CSR activities, and make significantly less of an environmental impact than they publicly report. Critics say that this is a result of the voluntary carbon market, which businesses may take advantage of by paying for the right to pollute. For example, German car manufacturer Volkswagen was famously called out for greenwashing when their vehicles were marketed to the public as environmentally friendly; however, the reality was that Volkswagen falsified their carbon emission tests by using a device on their vehicles to detect testing and change the vehicle’s performance to reduce carbon emission levels.

Implementation of carbon credit projects requires VCM participants to go through a multi-step process of registration, evaluation, authentication, monitoring, reporting, and verification, which is not only cost-intensive, but also time-consuming. Additionally, the protocols and requirements for monitoring, reporting, and verification are not standardized, creating inconsistencies throughout the market and among projects.

Lack of stakeholder inclusion and inequality

As mentioned earlier, voluntary carbon markets are self-regulated markets, often creating economic inequalities that favor the wealthy. Furthermore, environmental projects that are participants of the VCM often have an unintended negative impact on the socio-economic and environmental stability of local communities, particularly those in less developed countries. There is a clear need for improved regulation on the rights and ownership of market participants. Moreover, the VCM is still predominantly controlled by businesses, excluding individuals and retail participants who wish to join the market.

How blockchain can be a solution for carbon market problems

To address greenwashing in the carbon market, a blockchain-supported regulation could make all businesses required to report transactions and any legal documents on a public blockchain ledger to be viewed by anyone. That way, even if a company uses marketing strategies to falsify their reports, all carbon-related activities can be viewed on the blockchain for authentication.

To address issues with monitoring, reporting, and verification, blockchain-enabled platforms could be developed for market participants to access carbon data, verify real-time records and transactions, and improve the efficiency of calculations, tracking, and reporting of data. Ultimately, this will make the entire implementation process for carbon emission data more accurate, reliable, and standardized.

Lastly, to address the lack of stakeholder inclusion and inequality, decentralization of the voluntary carbon market removes gatekeepers for the carbon market and makes the market more accessible. Through a secure and decentralized network, blockchain can clearly identify and validate contributions from not only businesses, but also individuals who want to reduce their carbon footprint. Furthermore, more participants across the supply chain, such as consumers, distributors, suppliers, and manufacturers, can have access to the data on-chain and participate in blockchain-enabled tracing and reporting of carbon emissions.

Although the carbon market and carbon trading can be used to mitigate climate change, they could use improvements using the emerging disruptive technologies like blockchain. Blockchain technology can improve the transparency, verification, and efficiency, among many other areas, of the carbon market. For further reading on how blockchain can enable a more sustainable future, check out this article.